Hey Everyone!
I'm sorry that it has been forever since I posted anything.  Will try and do better from now on.  I promise!

There is so much going on that I want to talk about.  First up is the Billboard Music Awards. Let me start of by saying that I literally have not listened American pop music in ages, so I have had zero reason to pay attention to the award shows...UNTIL RECENTLY.  Since shows like the AMA's, BBMA's, and even the Grammy's are giving notice to the amazing talent that K-pop has to offer, I am so much more interested.  I even watch the red carpet shows now (which I never used to care about).  This year, what makes me most excited is the Top Social Artist Award.  There are 3 K-pop groups nominated.  GOT7, EXO, and BTS were nominated along with two other artists (Ariana Grande, Louis Tomlinson).  How fantastic is that?  The nominees for that category are literally a MAJORITY Korean.  That's huge for the USA.  As a whole, Non-English music is not always as popular here, but K-Pop is so addictive that we just can't get enough.  I'm so glad so many others are finding these groups and I hope EXO, GOT7 and many other K-pop groups get just as popular as BTS is here.

Side note:  I've never seen anything like the BTS phenomenon...and I was around when the insane popularity surrounding NSYNC was happening. This seems way bigger. Case in point:  I live in a very rural area.  In fact, though they are not the majority, there are tons of Amish people here. (Amish are a religious community that does not participate in many modern ways of life like electricity or motor vehicles...they travel mostly be foot, bicycle, or horse and buggy. They are known for their amazing wood craftsmanship, quilts, and incredible cooking among many other things). And yet even in this area, where it is as common to see a horse and buggy on the road as a semi truck, a high schooler told me that you could find BTS all over her school.  I was chatting with a teenager at a local hospital who turned out to be a BTS fan.  It's incredible how they seem to show up everywhere.  WOW! 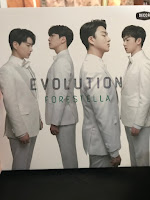 Secondly, I recently came across a Crossover Group called FORESTELLA and they have changed my world.  Seriously...there are not words enough to express how incredible the voices are in this group.  There are four members, but somehow they blend as one.  I have heard a lot of quartets over the years (seriously...a lot), but I have never heard a blend like this.  It gives you goosebumps whether you understand the language or not.  And they are so versatile that they can sing an aria type song one minute and then turn around an do a version of "Bohemian Rhapsody" that would make Queen proud (and maybe a bit jealous?)   I scoured the internet looking for their music and since iTunes only carries one of their songs, I bought the physical copy of their album "Evolution" (see photo). To say that it's a great album would be a massive understatement. They sing songs in English, Italian and Korean throughout the CD.  If you have not heard them, check out this video and then look up their "Bohemian Rhapsody on YouTube.  You won't regret it!   I played this video for an elderly lady who does not speak Korean and she was so impressed, she said, "How can there be a group like this?"  I totally understand her feeling. 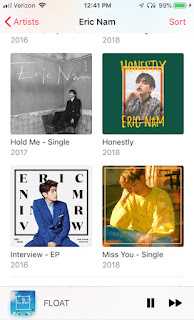 And finally, my week was made when I discovered that the amazing Eric Nam has started his own podcast called "K-Pop Daebak With Eric Nam" (you can find it listed as @DaebakShow on Twitter). I love listening to podcasts and even with only three episodes currently out, I think this one is going to be one of my favorites.  Why? Well, full disclosure, I've been a fan for awhile. The pic to the right is a peek at my iTunes collection.  But also, because this podcast is real.  Eric Nam is an incredibly talented and popular artist in his own right and he brings his love and knowledge of music as well as insider thoughts and stories that no other podcast I've found can compete with.  He's funny and he banters with two other people who seem like they are sitting in the background so not really always on the mic, but you can still easily hear them.  One of them is consistently asked to make up jingles on the spot...which he does. Seems like it should be awkward, but it totally works.  I highly recommend it!  You can find the podcast on iTunes here: https://podcasts.apple.com/us/podcast/k-pop-daebak-with-eric-nam/id1458858435  or it's available in other places too like Spotify and SoundCloud.

That's it for now people! If you want to follow my daily thoughts about Kdrama and K-pop, follow me on Twitter at kdramakpoptalkfest. I hope you have an amazing week and I'll be back soon!
at April 23, 2019 No comments: 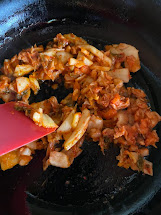